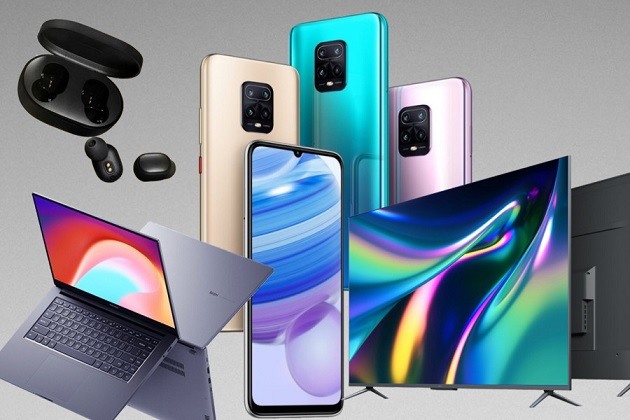 All the laptops feature AMD’s newest Ryzen 4000 series mobile processors built on a 7nm fabrication process. According to Xiaomi, these new 7nm processors will boost performance by up to 60 percent.

In terms of connectivity, all three laptops come with two USB Type-C ports, a 3.5mm headphone jack, a regular USB Type-A port, an HDMI port. They also have dual-band Wi-Fi and Bluetooth v5.0.

The 13 and 14-inch RedmiBook models are backed by 40Wh batteries while the 16-inch variant is backed by a slightly larger 46Wh battery.

Here is the list of configuration models with pricing.

Except for the different screen sizes, all the models shares the same list of specifications.

The Redmi Smart TV X series is powered by a quad-core SoC that has two Cortex-A73 CPU cores and two Cortex-A53 CPU cores, coupled with Mali-G51 GPU and 2GB of RAM. The smart TVs also equipped with 32GB of onboard storage.

To provide immersive audio experience all the models come with four 12.5W speakers. They support Dolby Audio and DTS-HD technology.

On the connectivity side, the new TVs have three HDMI ports, two USB ports (including one USB 3.0), one AV connector, one DTMB connector, one Ethernet port, and one S/PDIF connector along with dual-band Wi-Fi, Bluetooth v5.0, Infrared sensors.

Initially, Xiaomi is taking pre-orders for the Redmi Smart TV X series in China. Its availability scheduled for June 10.

Xiaomi has launched the Redmi Earbuds S in India. It is an Indian version of the Redmi AirDots S that was launched in China in April.

The Redmi Earbuds S comes with 7.2mm drivers, and are IPX4-rated for water resistance. The earphones counted among the lightest true wireless earphones available today as it weighs just 4.1g each.

In addition to that, it also supports voice assistants and has environmental noise reduction. For connectivity it features Bluetooth 5.0.

The earphones claimed to have four hours of battery life on a single charge. It can be expected by the charging case, up to 12 hours.

For gaming users it has a low-latency mode that provides smoother transmission of sound from the smartphone to the earphones with reduced delay. So this is useful when gaming on a smartphone.

Inside the retail box, you would get a total of three pairs of silicone ear tips for a customizable fit.

The Redmi Earbuds S falls under the most affordable true wireless earphones segment available from a major brand in India.

The Redmi Earbuds S priced at Rs. 1799 in India. It is now available for sale on the Amazon India website, Mi.com, Mi Home Stores, etc. The earphones are currently available in a single black color option.